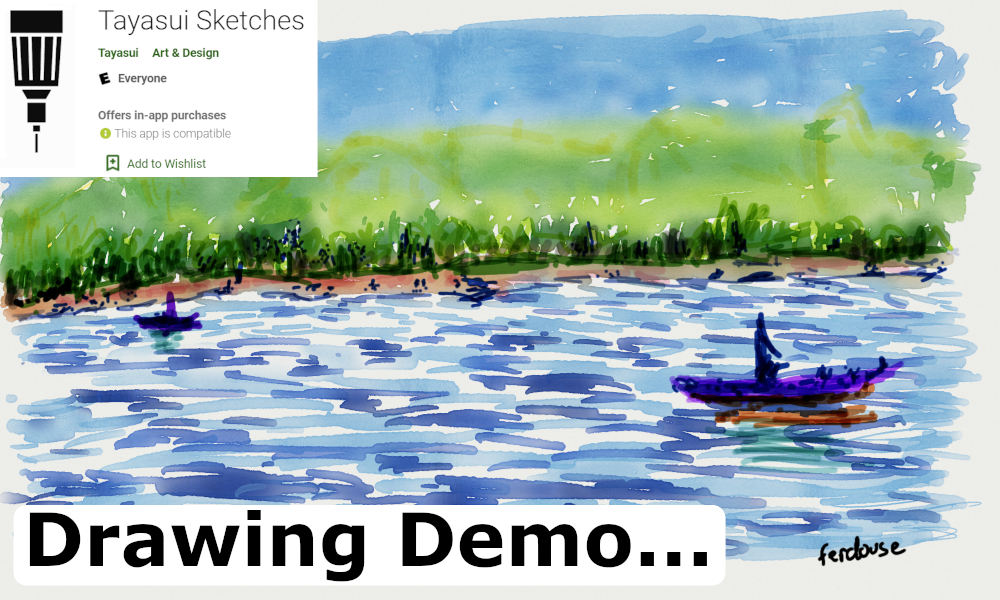 The Tayasui Sketches Painting and Drawing app is available from the Google Play store and is among hundreds of other drawing apps vying for popularity. My first impression was that it was good looking with a clear interface and has some nice renditions of the brush tool.

We will look closely into the installation and guide as well as doing an actual painting demo with this app. I have provided two Youtube videos of the install guide and a drawing demo of this app.

The app was easy to install but package size was rather high (60MB), so I assumed there were lots of goodies inside this app. After install, my first impressions of the brushes were that the upper limit was smaller than I had wanted. I found the same to be true for PaperColor which I reviewed earlier, see the review here.

As usual the app has some areas where you needed to pay to get to use them such as the brushes, layers etc. One of the most disappointing aspects of this app was that they had preselected colors instead of the full colour palette that you can find in other apps such as the Paintology drawing app. Although I have to admit that some of the popular apps including the PaperColor provided a limited color palette like this. In the case of the Tayasui Sketches app, I found later on that they were targeting a particular type of artist and the limited color palette was ok for this kind of drawing styles.

For this drawing demo with the Tayausi Sketches app, I decided I was going to do a lake scene with distant trees, hills which I generally enjoy painting and drawing. I started out doing the sky which I found the brush to be a little on the small side where I wanted to fill the sky with large swathes of color. I found this to be true with other apps that I had used and cannot always understand this limitation that developers put on their appa. If you use Paintology, you can pretty much set the upper brush to a size that can cover the entire canvas with a few brush strokes. The Paintology app allows for rapid drawing which most apps seem to ignore where they bury the essential drawing features deep down and requires a few click throughs to access. When you do a complex drawing such as realistic drawings which I routinely do with Paintology, I can end up doing several thousand strokes in one sitting. So you can guess, how many times, I would need to access features right within the canvas which becomes vitally important to the whole drawing process.

I continue to use the watercolor brush for the trees and foreground water scene and the brush worked well to give a sense of painting in the traditional sense. When thinking this way, the upper brush size would not appear to be a misgiving as I had originally expected. It did however freeze up when I was using the app and I wasn’t so sure what that was due to and if it was a bug within the app. Nevertheless, I needed to restart the app to get it going and fortunately my work was not lost, phew!

I found the undo and redo features a bit tricky to understand and use and it only appeared when you started a drawing. I think a better option would be to have the undo and redo functions always available on the app as most painting apps do.

I finished the drawing with the felt tip pen and that worked well with the canvas and again the app tries to emulate the traditional medium style. It somewhat reminded me of the popular Microsoft Fresh Paint, where Microsoft attempted to emulate the traditional mediums by using software algorithms and programming software. However the app falls short of the familiar Paintology drawing app which is the reference app that I use when reviewing and comparing other drawing apps from the Google play store. By far the free Paintology app has more features and tools that is too exhaustive to list in this review. You just need to go to the play store and get the app for yourself, link is provided below.

Like many other drawing apps out there, developers of the app need a way to make money so they will try to rope you in with pay to access or get extra features. Fortunately, with the provided tools in this Tayasui Sketches, you can get away and make creative paintings and drawings with the tools already provided. I personally don’t see the need to use layers, since the digital medium evolved over decades with this feature. However, the popular Photoshop which is primarily used by graphics designers and illustrators, layers make sense. Unless you want to become a graphics illustrator, you really don’t need illustrators. If you don’t believe me, check out some of the drawings that I have done without any layers and also with just one brush tool of the Paintology app. Udemy has up to 40 free courses on using Paintology with drawings on all kinds of subjects including landscapes, cartoons and all the way to photorealistic drawings and paintings.

Please check out my other reviews on my channel below and also the recommended channel by Paintology, so until then happy Painting and Drawing! 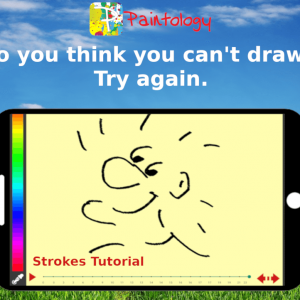 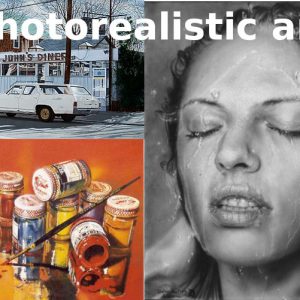